Do you believe that a hammock is actually has been changing the way we are travelling or at least it is starting to feels that way?

We may have never though before that the parachute fabric nylon material to made a hammock can’t only be the shelter we can setup when on a trip, but it can really open our eyes for many possible things in life.

I still remember that years ago when I was a kid, camping was actually the fun thing to do since there would be many of my friends come along. But as a kid, no matter how fun it was, we were actually been exhausted by the camping tools and gears that we have to brought.

Not to mention the tent as the main item that everyone or group should got along with all its accessories such as the groundsheet, the stakes, the metal poles to support the tent or changed it with the woods, and many more. Years ago, camping was meaning that you will be sleeping inside the tent with a less sleeping pad so your body can feel tired by the gravel when we were sleeping while rolling around on the ground.

I will say that as the great experiences, but knowing the fact that we were actually hurting ourselves, camping is no longer the fun activity I need to get. So that, the next years until know, I have not been experiencing the camping.

But, when the first time I was knowing about the hammock, it is actually changing the way how I am thinking about something. 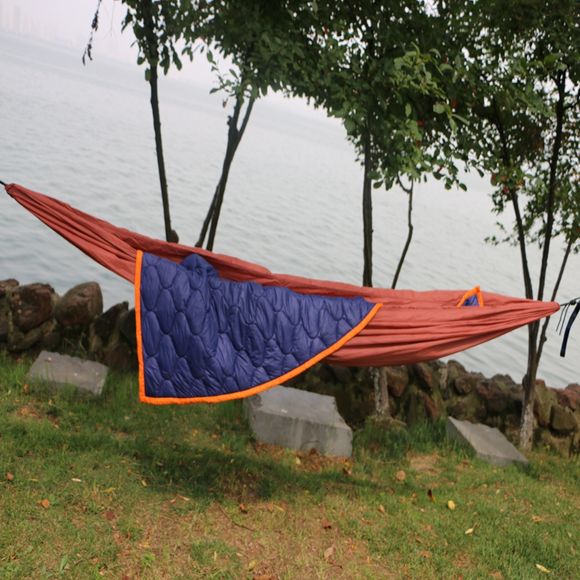 The more I am getting to know about it, the more I miss the beautiful experiences I was getting years ago. It is actually encouraging me to re-embrace something that I have been forgotten for so long: camping.

How interesting it is to camping or traveling with a hammock?

Just by seeing photograph of a person hanging in the air while resting on the parachute hammock, it feels really like a relief. I don’t know why it is happening, it may caused by the different height of sleeping where against the gravity can be so interesting for some people including me.

Realising that the conventional way of camping as what I have been experienced before is quiet hard not only for the kids but even for the adults, then getting a hammock is somehow a must especially for the camping enthusiasts.

It is because the hammock itself that is so much lighter compared to the tent so we can then decided to bring more items. At least, when you are bringing it, there will be more weight lifted up from your shoulders.

The main thing to be considered of when using it for camping is that you will only need to ensure that there will be the trees with certain distance that can be enough to setup yours.

Many of us may have been known too that a hammock can be perfectly fits on the bag and it isn’t necessarily needs to worry that it will use more rooms of the bag. Its volume may equal with only 2 or 3 of your t-shirts.

Knowing that it can really recommended as the new sleeping system while camping with all of about excellences, then hammock is no longer for camping only. Many people can make use of it even for traveling, adventuring or as simple as sleeping on air at home in the afternoon.